For the Record and From the Source - What Bugnini Really Said 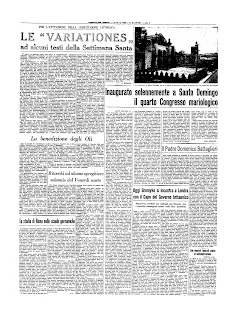 [For historical, clarification and educational purposes, an image of the original L'Osservatore Romano article (in Italian) is provided above.]

Archbishop Annibale Bugnini was the secretary of the Liturgical Commission that devised the New Order of Mass after the Second Vatican Council. Over the past several decades a quote has circulated, having been attributed to the late Archbishop, that was purported to have appeared in L'Osservatore Romano in 1965. The purported quote was in regards to the liturgical reforms which he was in charge of directing after the Council. What follows is the "quote" that has been famously attributed to Bugnini, the Great Architect of the Novus Ordo Missae:

"We must strip from our Catholic prayers and from the Catholic liturgy everything which can be the shadow of a stumbling block for our separated brethren that is for the Protestants."

We have seen the aforementioned attributed words cited throughout the years by many well-respected authors, particularly those who use the preceding words as proof that the New Order of Mass was designed to suit ecumenical goals with the Protestants. Moreover, it has been used to articulate how the liturgical reformers of the 1960's sought to "Protestantize" the way in which Catholics pray. However, it must be said, for the record that these are not the exact words of Annibale Bugnini in the March 19, 1965 edition of L'Osservatore Romano. What follows are the actual words (in which the reader will certainly still see the clear ecumenical goals aimed for in the liturgical reform of the liturgical prayers on Good Friday) from the article written by Bugnini titled Le "Variationes" ad Alcuni Testi della Settimana Santa (The "Variations" of Some Texts of Holy Week):

“The 7th prayer [of the new rite for Good Friday] bears the title: 'For the Unity of Christians' (not 'of the Church', which was always one.) No longer used is the pariah 'heretics' and 'schismatics' but 'all brethren who believe in Christ...'

Scholars think to shed light on biblical and liturgical sources from which the new texts are derived or inspired, which the Study Groups of the "Consilium" accomplished by using a chisel. And let's say that often the work proceeded 'with fear and trembling' by sacrificing terms and concepts so dear, and now part of the long family tradition. How not to regret that 'Mother Church- Holy, Catholic and Apostolic - deigned to revoke' the seventh prayer? And yet it is the love of souls and the desire to help in any way the road to union of the separated brethren, by removing every stone that could even remotely constitute an obstacle or difficulty, that has driven the Church to make even these painful sacrifices."
(Translation found in Reasons for Resistance; The Hierarchy of the Catholic Church Speaks on the Post-Vatican II Crisis, Queen of Martyrs Press. pg. 21)
Posted by Blog Operator at 8:10 PM 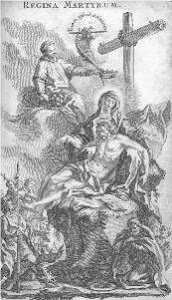 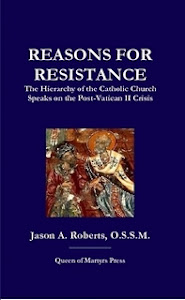 Was Vatican II an "infallible Council"? Was the Council a break with Catholic Tradition? What did Bugnini really say the liturgical revisions were supposed to accomplish? Are Catholics disobedient if they do not accept Vatican II and the New Rites of the Sacraments?

Reasons for Resistance; The Hierarchy of the Catholic Church Speaks on the Post-Vatican II Crisis by Jason A. Roberts, O.S.S.M. explores these and many more questions pertaining to the crisis of Faith in the Catholic Church today by citing some of the most influential hierarchs of the Church, including popes, cardinals, bishops and other clerics- all who maintain "good standing" with Rome - in order to prove that Vatican II, its spirit and its resulting liturgical rites are a break with Catholic Tradition and a danger to Catholics.

By compiling and presenting some of the most compelling quotes of the hierarchs of the post-Vatican II era in their own words, Reasons for Resistance as a presents the strongest arguments against a wholesale acceptance of the notion that Vatican II and the sacramental rites developed as are result thereof are in keeping with Catholic Tradition.

Reasons for Resistance also helps Catholics who reject the post-Conciliar novelties to prove their point by citing the Church's own clerics (including those who were at Vatican II) , and to convince Catholics who fear being branded as "disobedient"by rejecting such novelties, that they can and should reject them by obediently heeding the words of the Catholic Church's post-Conciliar hierarchs.

Queen of Martyrs Press is currently in the process of presenting again to the English-speaking world two great 19th Century works of the Servite Fathers:

The Servite Manual, Behold Thy Mother

The Mission Book of the Servite Fathers

We ask for your prayers as Queen of Martyrs Press continues on with the work of reproducing these two great treasures of spirituality, originally written to lead souls to Christ the King through the Queen of Martyrs.

Our hope is to once again make these and other works available to a world which needs Our Lady's intercession, sound apologetics for Catholic Tradition, and a true return to authentic Catholic spirituality which has been under siege for more than 50 years.

About Queen of Martyrs Press